STEEL VIPER FORCE is a blood-drenched homage to 80s and 90s action films that follows Lance Fiero, a booze-ravaged former member of Vancouver's last elite special ops team, on a quest for redemption.

Stripped of his pride and his liquor, Fiero is forced to carve out a new brand of justice on the city's drug-addled streets. 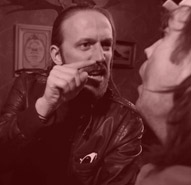 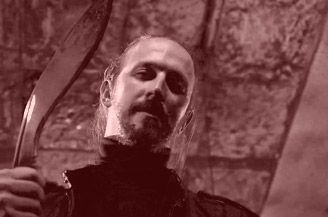 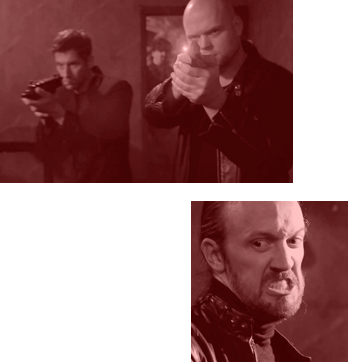 Scheduled for a feature-length shoot in 2014, STEEL VIPER FORCE has taken various shapes during the last two years of planning, prep, and production.
Read on to witness its evolution:

Inspired by bargain-basement direct-to-video knock-offs, action-flick aficionados Curtis Grahauer (Executive Producer/Director) and Cameron MacLeod (Executive Producer/Writer/Lead Actor) created the first draft of STEEL VIPER FORCE in early 2011 with the firm belief that if you set your sights low enough, anything is possible.

Play Fiero's first on-screen appearance was in this 5 minute teaser, featuring underage drug use, a double punch out, gruesome dismemberment, and some crazy heli-shots of Vancouver.

Following the Teaser Scene, we were left with a bunch of prop alcohol. And when you have prop alcohol, you might as well make alcohol commercials!

We next rallied support from friends, family, casual lovers, and enthusiastic strangers with a unique message: help us financially get the film off the ground, and literally get yourself in the film.

Offering unique perks through crowd-funding site IndieGoGo such as "Name your own fight move", "Tattoo your face on a character's neck", and "Star in your own death scene", we were able to raise a modest sum to get the SVF ball rolling (and earn some press in the process). 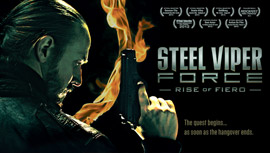 Play Before attempting our feature, we first tried our hands at a small chunk of it: the result was an action-packed, miniature taste of the full SVF meal. 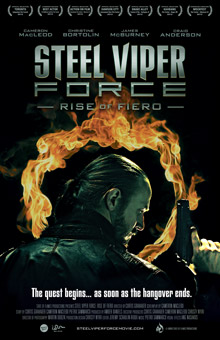 Shot in the summer of 2011, this 22-minute short was released in December of that same year (and even sneak-previewed in September alongside a Tommy Wiseau-attended screening of The Room).

**Rise of Fiero will be released online this November!!!**

You might be asking, So where's the feature? Right now it exists as a killer 90-page script MacLeod has written using his mind while punching a keyboard with his fists. It is as slick as a chrome-plated 9mm and has the muscle of a '68 Camaro with a bunch of 'roided up dudes inside. Get ready: production is planned for summer 2014.

Not to leave you hungry, we've just released some new videos!

Wait till you
hear the theme song.

For a preview of what SVF has in store, check out the videos below. 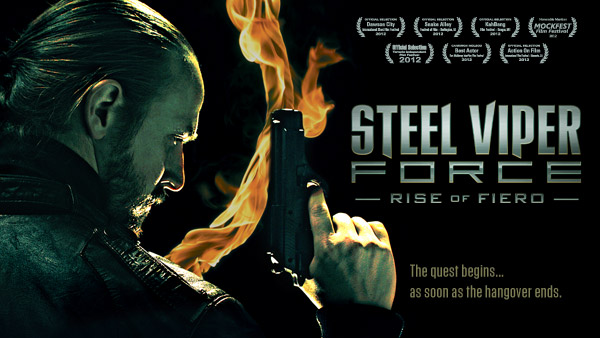 NEW! This action-packed 22 minute short is finally online! Shot in the summer of 2011 and featuring such recognizable Vancouver faces as comedian Graham Clark, CBC Radio 3's Grant Lawrence and musician Steve Bays, Rise of Fiero was officially selected for seven film festivals across North America in 2012. [22:21] 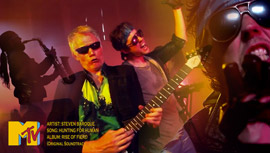 The theme song from Rise of Fiero is an all out nuclear assault on the senses, with katana-sharp guitar shredding and non-perishable generic drum machine beats. [2:55] 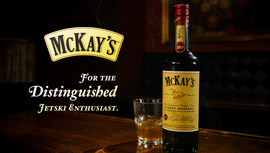 Kyles McKay's Finest Whiskey is the flagship product of JetskingKing Distilleries, and the flagship taste of your mouth. [1:43] 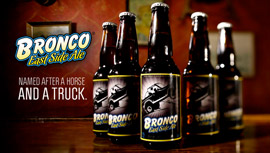 The perfect booze-heavy brew to chill out with after a long day of riding your bike around on mushrooms. [0:53] 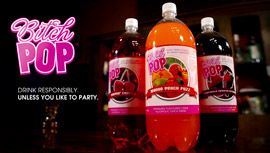 Get your party started with Bitch Pop, Kyles McKay's very own line of alcoholic-flavoured cider! [1:07] 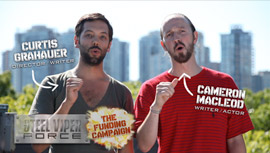 A call to action to PUMP YOU UP about our funding campaign, including a cameo by Kyles McKay wielding dangerous firearms, of course. [1:26]

Get a taste of the action in this teaser scene shot in the spring of 2011 and featuring several of the film's superstars. [5:13] 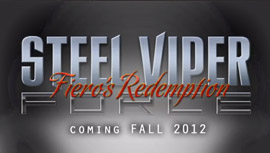 Made in the early days of production and planning for SVF, Kyles first introduced the film to the world with this dy-no-mite mini trailer. [1:12]

THANKS FOR YOUR HELP!

We are awed by your generousity, support and enthusiasm for our film,
and raised over $3,000 through cash & online donations!

Check out some of the press our campaign received: 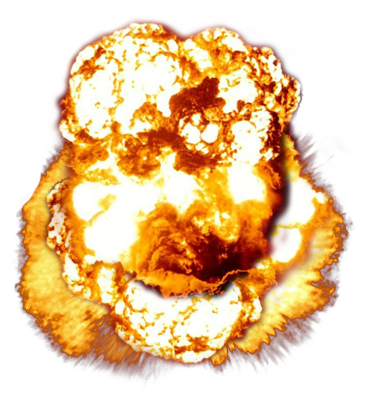 Bruce Willis and the rest of his iron-balled ilk were given no less than 28 million dollars to make Die Hard. We need...less.

Having recruited an elite team capable of maximizing even the modest-est of budgets, we still need a small sum to set in motion events that will change the course of Vancouver-based action films forever. Donate to the cause, and you'll be our action hero. 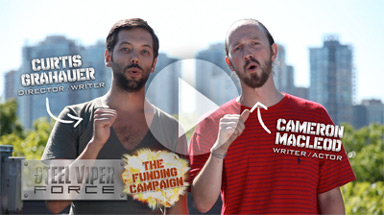 We're not bragging, we're just warning you: these ain't no bums making this film.

Curtis Grahauer
Executive Producer / Director / Writer (Story)
Curtis is Weekend Leisure's primary director and editor, as well as one of the initial creative forces behind SVF. He's also a practicing artist, one that knows way too much about action movies. We dare to you challenge him to a straight-to-DVD trivia contest.

Cameron MacLeod
Executive Producer / Writer (Story & Screenplay) / Actor
Cam is an actor, comedian, one half of Manhussy and the comedy director of both Music Waste and the Olio Festival. You might have spotted him in The Party or as the staple host of the Hero Show at the China Cloud Theatre. He also bears a striking resemblance to our protagonist.
Twitter

Christy Nyiri
Executive Producer / Production Designer
Christy is a member of Weekend Leisure and designs pretty much everything for SVF (including this site). She's also responsible for the webs/graphics of countless other projects, and enjoys power lunching and saying she's "busy".
Twitter | www

Amber Daniels
Producer / wonder woman
The sole female component of The Shots, Amber produces things like real life tv shows, real life internet shows and lady jokes. She feels her most comfortable in a pantsuit and has never met a production she couldn't organize.
Twitter

Martin Dudzik
Director of Photography
Martin is going to make our film as beautiful as he can with his magical Eastern European eye for mood lighting. He was born with a light meter in his pocket and a camera op on speed dial. BAM.
www

Jeremy Schaulin-Rioux
Editor
This guy! He's a member of The Shots and we've heard he's made some very popular streetball videos. He's also super good at street stunts and eating, in general.
Twitter

Ang Nasiakos
Special Effects Supervisor
Ang is a member of The Shots and has recently returned to Vancouver to make pirate ship cars and movie magic. No word yet as to whether he's found what he's looking for.

Pietro Sammarco
Composer / Sound Design / Writer (Story)
Pietro is an audio genius. He's an invaluable part of Weekend Leisure and has mixed local favourites like The Party and Hunting for Human. When booming, he definitely makes sure it points straight down the throat.
www

Steve Bays
Actor / Music Consultant
Ever since Steve's cameo in The Jetsking King: Redux, he hasn't been able to say no to an action-movie role, nor to help produce the soundtrack. Oh yeah, he's also the lead singer of Hot Hot Heat, NBD.
Twitter

Emmett Hall
Musician / Actor
Emmett is a multi-talented musician/comedian/animator who performs with the award-winning improv group The Sunday Service, as well as produces their beautiful podcast, A Beautiful Podcast. He's also the co-writer, performer and glistening biceps behind Hunting for Human.
Twitter | www

Alex Rybalko &
Bret Fernets
Camera Department
We wondered, why settle for just one camera op? Alex is a devout lover of Canons (the brand) and whispers sweet nothings to them in Ukranian, while we were just plain lucky to have Bret emerge from a hole in Saskatoon just in time to work on SVF.

Christina Byrne
Makeup
Christina follows her mother's footsteps as a makeup artist and wandered in from Mexico City to do our production. She's a grad of VFS and has been doing wonders turning comedians into hobos.

Ayma Letang
Art Director
We stuck the multitalented Ayma in charge of our wardrobe and art department. We also found out she can act so we're listing her as Kyles' understudy and stunt double.
Twitter

Ryan Hennigar
Assistant Director
Ryan can write a call sheet like nobody's business while breaking down scripts left, right and centre. His idea of a fun night is slating till 4am. Or it will be shortly, anyways.

Tom Hill
Marketing
Tom is a writer, comedian, and marketing man. He is handling our sponsorship campaign and many of the words on the web about the project. He's also a member of Pump Trolley Comedy and Hip.Bang! He's also also really into getting punched out.
Twitter

Stephen Irving
Media
We dragged Stephen into this project when we overheard him utter the phrases "I'm do PR" and "I think a lot of the world's problems could be solved by a group screening of Point Break" in the same breath at a bar. He also does "communication strat" and "proj management" for real companies.
Twitter | www

Craig Anderson
Actor / Script Editor
Craig is part of the comedic duo Bronx Cheer as well as an improviser with The Sunday Service and Ghost Jail Theatre. You might recognise him from Nickelback videos or from acting alongside cheerleaders in Hellcats.
Twitter

Phil Rabin
Front end developer
After a hard day of leading a programming team at a big nerdy company, Phil unwinds by seducing tennis opponents with Phish covers on his guitar. He wrote nearly all the custom javascript for this site and we can't thank him enough.
Twitter | www